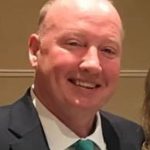 A Graveside Service will be held Thursday at 10 am, officiated by the Rev. Richard Fox, Pastor of St. Patrick’s Parish, West Scranton, at Cathedral Cemetery, Scranton.

Kevin M. Shaughnessy, of West Scranton, passed away Saturday morning after being stricken ill at home. Born in Scranton, he was the son of the late John “Jack” and Roseann Regan Shaughnessy. Kevin was a 1988 graduate of West Scranton High School and excelled in football (#19) as well as track and field. He received a four-year certificate in commercial and residential electricity from the Lackawanna County Area Vocational Educational Center and had 32 years of commercial and residential experience. Kevin was employed by Lackawanna County as the Director of Buildings and Grounds and also held previous employment positions with Lucent Technologies and AT&T Corporation. Kevin was a former executive board member if the IBEW local 81. He also was on the committee overseeing the $17 million renovation of the Lackawanna County Government Center, as well as serving in many other union-related leadership roles. He had worked on numerous projects in Northeastern PA throughout his career as well as the World Trade Center 9/11 attack in NYC. In 2018 Kevin received the Ancient Order of Hibernians “Hook” O’Malley Man of the Year Award. Kevin was the current Vice-President of the AOH and was to be the Incoming President for 2021. He was a Charter Member of Hook O’Malley Division 4, and the 2019 John Mitchell Man of the Year Union Award recipient. Kevin was proud of being a member of the 1979 Little League Championship District 17 All Star team. He was also the co-owner of Shaughnessy’s Tavern in the Bellevue section of West Scranton.

Kevin is survived by his daughter, Peyton Neely Shaughnessy, who was the light of his life and whom he loved with all of his heart. They enjoyed special trips and spending time together. Four brothers, John Francis, Patrick, Joseph and wife Belinda, Brian and wife Desiree and his companion, Anna Tunney, nieces and nephews, Kasey, Brianna and daughter Sadie Rose, Taylor, Katelyn, Kelsey and Sean. Kevin was a kind and respectful gentleman who would help anyone in need, whether it be repairs, electrical, advice, or just a shoulder to lean on. He will be forever remembered as a special dad, brother, uncle, companion, friend, activist and caring and loving man. A Graveside Service will be held Thursday at 10 am, officiated by the Rev. Richard Fox, Pastor of St. Patrick’s Parish, West Scranton, at Cathedral Cemetery, Scranton. In lieu of flowers, a donation can be made to the Peyton Shaughnessy Educational Fund, 1002 Riley St., Taylor, PA 18517. Arrangements have been entrusted to the care and direction of the Edward J. Chomko Funeral Home & Cremation Services, 262 Railroad Avenue, West Scranton.