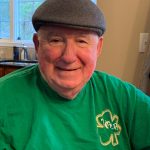 Mass of Christian Burial will be celebrated on Saturday at 10 am at St. Patrick’s Parish, 1403 Jackson Street, West Scranton, by the Rev. Fr. Richard Fox, Pastor.

Military Honors will be accorded by the Dickson City Veterans Honor Guard after mass.

Masks and social distancing, are required. Seating will be limited.

Lewis B. “Santa” Williamson, 76, of West Scranton, passed on Monday evening at Regional Hospital of Scranton due to complications from COVID-19. His wife of 45 years is Maureen Harrity Williamson. Born in Carbondale, he is the son of the late James and Tillie Lewis Williamson. Lew was a graduate of Ben Franklin High School, Carbondale, served in the Pennsylvania Army National Guard as a SPC and was a member of St. Patrick’s Parish, West Scranton.  He was an officer in the American Legion Post 0221, Carbondale, and a member of the American Ukrainian Vets Association for many years. One of Lew’s most prideful legacies was that he was the official Santa in the annual City of Scranton’s, Santa Parade since its inception in 1993.  He was an active baseball umpire for over 45 years covering many leagues which included Little League, Miss E, Teener, ASA and American Legion Baseball. During his working career, Lew had retired as a furnace operator for the DOD at the former Chamberlain Manufacturing Corporation of Scranton and upon his retirement from Chamberlain he took employment at Lackawanna College as a Safety Officer and then for Telespond Senior Service as a transportation specialist. Along with his wife Maureen, he is also survived by three sons, Eric Williamson and wife Tammy, Scott Williamson and wife Kelly, Paul Williamson and wife Gracelynn; his beloved and adored six grandchildren, Sadie, Gavin, Brady, Evan, Callie and Brie; one sister, Janice “Honey” Wilson and husband Robert, Honesdale, two brothers; James Williamson Jr and wife Kay, Carbondale, David Williamson and wife Genie, Warminster, one aunt, Nancy Corrigan, Carbondale, many nieces, nephews and cousins.

We are all humbled and truly grateful for the overwhelming amount of people who have responded in so many ways about how he has touched their lives. The magic he continually brought to children and parents alike, were shown through their love and joy for him, especially during Christmas. His legacy will continue to be felt for generations and his character will forever be unmatched.  The world is a better place for having him be part of it.

Mass of Christian Burial will be celebrated on Saturday at 10 am at St. Patrick’s Parish, 1403 Jackson Street, West Scranton, by the Rev. Fr. Richard Fox, Pastor. Friends are invited to share condolences at the church from 9 am until time of Mass at 10. Masks and social distancing, are required. Seating will be limited. Arrangements are entrusted to the direction and care of the Edward J Chomko Funeral Home & Cremation Services, West Scranton. Inurnment will be held at a later date.  Military Honors will be accorded by the Dickson City Veterans Honor Guard after mass. The family requests that in lieu of sending flowers, any friends wishing to honor Lew are invited to make a donation in his name to St. Jude’s Research Hospital at www.stjude.org/donate/ or by mail, 501 St. Jude Place Memphis, TN 38105.