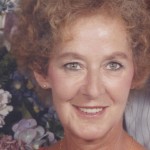 Loretta Samuel Dixon, 75, of West Scranton, died Sunday at Hospice of the Sacred Heart, Dunmore, after a courageous battle with cancer. Her husband of 45 years, William B. Dixon died April 4, 2004. Born in Scranton, she was the daughter of the late Albert and Mary T. Lescowitch Samuel. A 1958 graduate of Scranton St. Patrick High School, she was a member of St. Patrick’s Parish, West Scranton, and had been employed at Capitol Records, in the TRL dispatch office and retired in 2012 from the family business, Dixon Paving. Loretta was a loving wife, Mom, Gramma, Great Gramma, sister, aunt, cousin and friend to many. She enjoyed entertaining family and friends for special occasions, particularly for Christmas, Easter and Thanksgiving. During the summer months she would have her grandchildren and great grandchildren almost daily at her swimming pool in the back yard. Loretta was an avid Green Bay Packer and country music fan. She is survived by two sons, William A. Dixon and wife Charlene, Scranton, Daniel Dixon and wife Tammy, Moosic, one daughter, Debra Perry, Scranton, six grandchildren, William Dixon and wife Allasondra, Jason Perry and fiancée Jackie Vaicekauskas, Laura Perry, Amanda Gilroy and husband Sean, Dana Perry and Eric Dixon. Six great grandchildren, Kiersten, Sean, Lily, William, Jake and Evie. One brother, Albert Samuel, Scranton, nieces, nephews and cousins. She was also preceded in death by one great grandchild, Madi Perry, one brother, Joseph Samuel and close friend, Earl Kugler. Funeral Services will be held on Wednesday at 10 am in the Edward J. Chomko Funeral Home & Cremation Services, 262 Railroad Avenue, West Scranton, officiated by Msgr. David L. Tressler. Viewing for family and friends will be on Tuesday, 4 to 7 pm and on Wednesday, 9 am until time of services. Interment will be held privately at Fairview Memorial Park, Elmhurst. In lieu of flowers, donations can be made to Hospice of the Sacred Heart, 100 William Street, Dunmore, PA. 18510 or to the Judith Weiss Children’s Hospital, Danville, PA