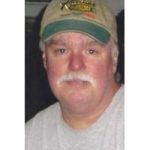 Louis A. Ciuccio, Jr., 56, of North Scranton, died Saturday at home after a long illness. His wife is Deborah Murphy Ciuccio, and the couple would have celebrated their 37th wedding anniversary on October 29th. Born in Scranton, he is the son of Elizabeth “Beth” Slugg Ciuccio, of Scranton, and the late Louis A Ciuccio Sr. A 1975 graduate of West Scranton High School, and he had been employed as a meat cutter for over 30 years for Schiff’s of Scranton until his illness. Louis was an avid West Scranton Invader, Penn State and Chicago Bears fan. He enjoyed fishing, hunting and his adoring family who were the center of his life. He is also survived by two daughters, Cara Phillips and husband Roy and Renee Needham and husband Martin, all of Scranton, two grandchildren, Selena Phillips and Brayden Needham, five sisters, Linda Fasulo and husband Tony, Laura Bieniecki and husband Bill, Amy Ciuccio and fiancée Tim Bunevitch, all of Scranton, Barbara Pesta and husband Leonard, West Pittston, Alison Castellino and husband Charles, Wyoming, 2 aunts, nieces, nephews and cousins. He was also preceded in death by one sister, Teresa Ciuccio. Viewing for family and friends will be on Tuesday, 4 to 7 pm with a funeral service to be conducted at 7:30 pm by the Rev. Arthur Davis, in the Edward J. Chomko Funeral Home & Cremation Services, 262 Railroad Avenue, West Scranton. Interment will be private at the convenience of the family.