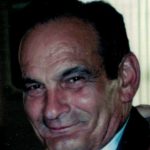 Funeral Service – Beginning at 8:45 am from the Funeral Home

Interment– with Military Honors to be accorded at Cathedral Cemetery.

Louis Maroni, 83, formerly of West Scranton, died Sunday morning after an extended illness at the home of his son and caregiver, David. His wife, Mary, died in August of 2014.

Born in Scranton, he was the son of the late Thomas and Grace Maroni. Louis was educated in Scranton Technical High School, was an Army Veteran serving during the Korean War, and was the owner/operator of Maroni’s Pizza on St. Ann’s Street until he relocated his Pizza shop on South Main Avenue in West Scranton. He was a member of the Taylor American Legion and the American Ukrainian Veterans Club, Scranton.

Louis is survived by five sons, David and Fiancée Mary Kate McGlynn, with whom he lived with, Louis, Michael, John and James Maroni, two daughters, Cindy McAndrew and Tracey Stivala, and many grandchildren, great grandchildren and nieces and nephews. He was also predeceased by two brothers, Thomas and Daniel.

His funeral will be held on Thursday, beginning at 8:45 am from the Edward J Chomko Funeral Home & Cremation Services, 262 Railroad Avenue, West Scranton, with Mass of Christian Burial at 9:30 am in St. Lucy’s Church, 949 Scranton Street, West Scranton. Interment to follow with Military Honors to be accorded at Cathedral Cemetery. Viewing for family and friends will be on Wednesday, 5 to 8 pm. To leave a condolence, visit the funeral home website.