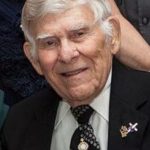 Martin R. Napolitano, 91, a resident of Scranton’s Bellevue Section, passed into Eternal Rest at the Green Ridge Health Care Center on Sunday, October 23.   He leaves his wife of 70 years, Rose M. Fiorani Napolitano.  They celebrated their 70th wedding anniversary on June 15, 2016.  Born to Michael and Philomena Napolitano, he was raised in Scranton and graduated from West Scranton Senior High School.  Martin was a WWII Veteran serving with the Army Air Corps.  After his military service Martin began his career as a carpenter and cabinetry maker.  He had a passion for the trades.  Early in his career he worked as a superintendent in commercial high rise construction and also taught trade classes at Penn State’s local Scranton Campus.  He later transitioned to a self-employed general contractor building residential homes under his company Romar Kitchens and Homes.  Martin also served as superintendent of the Lackawanna County Court House for a period of time.  He retired at the age of 81.  Martin was a member of St. Lucy’s Church where he served as a Sacristan, Extraordinary Minister and was part of the Holy Name Society.  He had many accomplishments in life that we are so proud of.  He was truly an inspiration to us all and touched the lives of many who knew him.  Martin was a very generous, loving man; he loved his wife, his family and God.  His personality was contagious, always knowing how to make you smile and laugh and he left a lasting impression on anyone he met.  He is survived by his daughters Phyllis Manion and husband Dennis of Bloomfield, NJ, Tina Marino and husband Michael of Scranton; seven grandchildren, Marc Marino, Michael Marino, Nicholas Marino, Nicole Marino Turi, Dennis Manion Jr., Kimberly Cirincione and Nicole Manion; five great-grandchildren, Giana and Maxum Turi, Nixon and Nico Marino and Eric Cleveland; and several nieces and nephews.  He was preceded in death by granddaughter Tiffany Manion, and sisters Florence Battaglia, Ciela Palino, Mary Nap and Rita Nap, brothers Nicholas, Anthony, Carl, Patrick, Michael and Jack Napolitano.  Special thanks to the staff at the Green Ridge Care Center, Visiting Angels and Hospice of the Sacred Heart for their devoted and kind care.  A mass of Christian Burial will be celebrated Friday, October 28 at 9:30 am in St. Lucy’s Church, West Scranton by Fr. Alvaro, Fr. Ferretti, and Dea. Mendicino.  Entombment will follow at the Cathedral Cemetery.  Viewing for family and friends will be held on Thursday, October 27, from 4 to 7 pm in The Edward J. Chomko Funeral Home & Cremation Services, 262 Railroad Ave., West Scranton.  In lieu of flowers, memorial donations are preferred to be sent to: St. Jude’s Childhood Research Hospital, 501 St. Jude Place, Memphis, TN  38105.