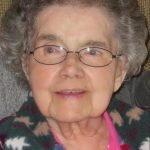 Mary Migliori Vizentine, 91, of Lake Winola, died Monday evening at Hospice of the Sacred Heart, Dunmore. She was the widow of the late Matthew J. Vizentine who died on November 11, 1971. Born in Scranton, she was the daughter of the late Mario and Rosaria Yacovoni Migliori. A graduate of St Frances Cabrini Elementary and West Scranton High School, she was a homemaker who dedicated her life to the raising of her children, grandchildren and great grandchildren. Mary was a member of St. Mary of the Lake Church, Lake Winola. Mary loved her family and they were her life. She was a loving wife, mother, grandmother, great grandmother, sister and friend who would care for anyone in need of assistance. She was the baker of the family and would bake Italian cookies by the tray full, birthday cakes, special occasion cakes, which included wedding cakes. Mary did this for her family and friends without reservation. She is survived by three grandchildren, Diane Southworth and husband Judd, MD, Christine Harris, Scranton, Thomas Harris and wife Shari, Duryea, six great grandchildren, Thomas C. Gazoo and fiancée Amy Ragni, Corey Gazoo, Brendon Harris, Rainey Southworth, George Southworth, Hayden Harris, three brothers, Nicholas Migliori, Martino Migliori, John Migliori, nieces and nephews. She was also preceded in death by one daughter, Lucille Harris, four brothers, Salvatore, Casper, Benjamin and Angelo Migliori, three sisters in law, Patricia, Martha and Ann Migliori, one son inlaw, Thomas E. Harris. Funeral Services will begin on Friday at 9:15 am from the Edward J. Chomko Funeral Home & Cremation Services, 262 Railroad Avenue, West Scranton, with Mass of Christian Burial at 10 am in Immaculate Heart of Mary Chapel, 1605 Oram St., Scranton. Interment will follow in Cathedral Cemetery. Viewing for family and friends will be on Thursday, 5 to 8 pm.