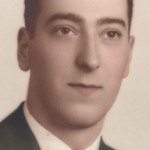 Monroe M. Schadt, 90, of Scranton, formerly of North Plainfield, NJ, died Sunday at Geisinger CMC. He was the widower of Janet M. MacKenzie who died in 1986. Born in Scranton, he was a son of the late Milton H. and Ruth Meredith Schadt. He was a 1945 graduate of Scranton Technical High School and received his Certification in accounting from LaSalle University and Rutgers University. He had been employed in the banking business as a teller and loan officer and Monroe was a member of the Westfield New Jersey United Methodist Church. He is survived by his brother, Warren M. Schadt and nieces Karen Schadt and Tina O’Malley, Scranton. He was preceded in death by his sister inlaw, Julia Schadt in 2011. Funeral Services will be held on Wednesday evening at 5 pm, officiated by Pastor Scott O. Miller, St. Paul’s United Methodist Church, South Scranton. Interment will be on Thursday at Fairview Cemetery, Westfield, NJ. Calling hours will be on Wednesday, 4 to 6 pm, in the Edward J. Chomko Funeral Home & Cremation Services, 262 Railroad Avenue, West Scranton.