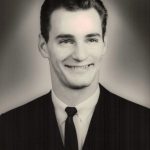 Mass of Christian Burial will be celebrated on Tuesday at 10 am in Our Lady of Mount Carmel Church, 322 Chestnut Street, Dunmore, PA 18512.

Live Streaming of the Mass will begin at 10 am on the funeral home Facebook Page.https://www.facebook.com/ChomkoFuneralHomeAndCremationServices

Masks and social distancing is required.

Paul A. Rusinko, Sr. of Clarks Green, passed away quietly on the January 27, 2021, after battling several medical problems.  Paul is survived by his one and only son, Paul A. Rusinko, II and his wife Keri, and his 3 grandsons…Paul III, Chad, and Shane Aaron Rusinko of Ohio.

Paul set his goals high, met them, and lived a fulfilling life that most people can only dream of.  He did everything he ever wanted to accomplish.   As a successful entrepreneur, inventor, artist, and self-made man who traveled in top corporate executive circles, was offered positions in those circles, but preferred to start his own business and branch out on it.  His career began at a very young age while in high school, working part-time pulling transmissions apart, finding the problems, and putting them back together again.  He was born a “natural” for knowing and understanding vehicles.  He was later hired by the largest Ford dealership where his expertise was immediately noticed and became the youngest Service Mgr. ever known.  At that time, Ford vehicles were having major problems with their new vehicles.  Paul came up with the redesign of a very intricate part that solved the problem and saved Ford a lot of money.  He knew then he had potential for bigger things and got into his own business.

He had also helped to build, from the ground level on up, a precision metal company of the family’s that is now a multi-million dollar business.  But, he knew he also had to fulfill his military service, too, so he joined the Army, got caught up in the Cuban-Missile Crisis, was confined to the Base during it, and then later, served in the PA National Guard for 7 years.  Somewhere in between, he managed to get his Private Pilot License and spent many a day with his pilot friend who owned a Cessna, taking short trips to NYC and around the local area.  Paul excelled in his artistic ability while enjoying retrofitting Classic Antique cars, of which he had a few.  He had a love of model trains as well, building his own platforms and cities/towns.

Above all, his greatest loves in life were his son Paul II and his lifetime mate, Jane, who he is now with for eternity.  He loved Jane and Paul II beyond words.  There is happiness in death, and that is knowing Paul got his wish to be once again with Jane, the love of his life as they both watch over young Paul and his family from above.

Mass of Christian Burial will be celebrated on Tuesday at 10 am in Our Lady of Mount Carmel Church, 322 Chestnut Street, Dunmore, PA 18512. Interment with Military Honors will follow at St. Michael’s Byzantine Catholic Cemetery, Dunmore. Masks and social distancing is required. Live Streaming of the Mass will begin at 10 am on the funeral home Facebook Page https://www.facebook.com/ChomkoFuneralHomeAndCremationServices. Arrangements entrusted to the Edward J. Chomko Funeral Home & Cremation Services, 262 Railroad Avenue, West Scranton.