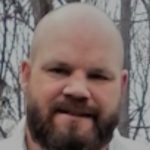 A memorial service will be held on Wednesday July 20 from 5 to 8 pm in the funeral home.

Richard Charles Entrot III, 46, was reported missing on July 8 and found on July 12, 2022. Born in Scranton he is the son of Betty Ann Entrot and the late Richard Charles Entrot II.   He was a 1995 graduate of West Scranton High School, was of the Christian Faith, and was employed as a fork lift operator at General Dynamics. He is survived by his daughter, Myah Entrot, mother, Betty Ann, his lifelong companion; Chrys Smith Sobolewski, two step children; Shelby and Landin Sobolewski, a sister, Lisa Robinson and his loyal dog Rooker. Rich was so much more than what can be put into words for all that he was. The biggest was how he loved with kindness and no judgement. He was a gentle giant, willing to help anyone at any time. Rich was a high school football star #35, and received a football scholarship to Mansfield State University and after suffering an injury, his football dreams were over, and he became an avid golfer and fisherman. Rich was a Chicago Bears fan since childhood and was their biggest fan throughout his life and he also loved Sponge Bob. He worked at General Dynamics for the past 22 years and never lost his sense of humor; (he should have been a comedian) and his laughter and smile were infectious. Rich was dedicated to his daughter Myah, whom he raised from birth, his two step children; Shelby and Landin, and of course the love of his life, Chrys. His devotion and love he had for his mother, brothers and sister was like no other and should be something we all strive for. You could find Rich cooking or grilling, which was one of many passions he loved. He loved fiercely and he will be fiercely missed and will always be remembered as our “Superman”.

He was preceded in death by his father Richard Entrot II and two brothers Christopher M. Cadwalder and James Phillip Entrot. A Lantern Lighting Memorial will be held on Saturday July 23 at 100 Pine Grove Farms Road, Waverly PA 18471 from 2pm until dark in Rich’s honor. A memorial service will be held on Wednesday July 20 from 5 to 8 pm in the Edward J. Chomko Funeral Home & Cremation Services, 262 Railroad Avenue, West Scranton.