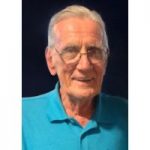 Robert A.”Bob” Shoener of Scranton passed into eternal life on Wednesday,
March 26, 2014. His wife of 49 years, Elizabeth Shoener, passed in October of 2000.
His parents were Arthur B. and Helen Green Shoener.
Bob formerly worked for the A&P Tea Company, Ligget and Myers, and retired
from the Hershey Chocolate Corporation. He was a board member of Northeastern
Baseball and a former elder for the Church of the Cross and Petersburg Presbyterian
Church.
He will be dearly missed by his children; Edward R Shoener, Scranton; Carol J
Shoener, Scranton; Nancy E Shoener, Bethlehem; Judy A Snyder, Dunmore. His
grandchildren are Rob Shoener, Sara Shoener, Bill Shoener, Kate Shoener, Edward
Shoener, Elizabeth Snyder, and Joshua Snyder as well as four great grandchildren
Harper, Grace, Brylee, and Benjamin. He will also be missed by his best friend and
partner in crime, Elizabeth Lamm.
A praise service will be held on Saturday, March 29, 2014 at Dunmore
Presbyterian Church, Chestnut Street, Dunmore. The service will begin at 11 am with
calling hours from 9:30 am until the start of the service. In lieu of flowers, donations may
be made to a charity of the donor’s choice. Arrangements by the Edward J. Chomko Funeral Home & Cremation Services, 262 Railroad Ave., Scranton.