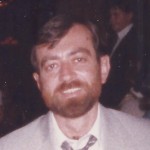 Robert “Bob” Lewis, 65, of Moscow, passed into Eternal Rest in the comfort of his home on Sunday, October 9th, following a lengthy illness. His wife of 41 years is Cathy Kornutiak Lewis who was Bob’s childhood friend. He was a former member of St. Vladimir Ukrainian Catholic Church, Scranton. Born to Lou and Helen Lewis, he was raised in Scranton, graduated from Scranton Technical High School in 1969 and served as a Sergeant (E-5) in the PA Army National Guard, Plymouth Meeting Division from September of 1970 to 1976. Bob was very proud to have earned “The Soldier of the Year Award” in 1974. Prior to retirement, Bob was the plant electrician at Gertrude Hawk Candy, Dunmore. He will be remembered for his quick wit, sense of humor, love of family, especially his six grandchildren, woodworking, being able to “fix anything” and Florida travels. Bob is also survived by one son, Jay and daughter inlaw Melissa Brunnenmeyer Lewis, Moscow, six grandchildren, Phoenix, Braeden, Savannah, Xander, Sawyer and Ilyza, one sister Beverly Preambo, Scranton, two nieces, Jacquie and Sherri. Bob will be deeply missed by all who knew and loved him. He was preceded in death by both parents and one brother John Lewis, Services will be private and entrusted to the Edward J. Chomko Funeral Home & Cremation Services, West Scranton.