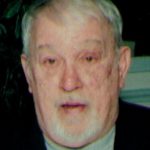 Services will be private.

Robert J. Kasperkoski, 76, of Taylor, passed away on Monday at home. Born in Old Forge, PA on August 27, 1943, he is the son of the late Benjamin and Frances Succolosky Kasperkoski. Bob was a graduate of Old Forge High School, and enlisted into the Army, shortly after high school. Upon returning from his enlistment, Bob went to work for the Chamberlain Corporation of Scranton for more than 20 years and then became a truck driver for Kane Trucking. Until retirement. Bob is survived by his significant other of 44 years, Ann Balko Harrington. Bob was preceded in death by his brother, Eugene Kasper and his sister, Andrea Kasperkoski. Services will be private.