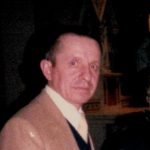 Interment will be held at the convenience of the family.

Robert P. Kovach, 83, died Sunday. He is survived by his wife, Frances Kovach of Dunmore. Robert was born on July 4, 1936 and was the son of the late John and Helen (Kapacs) Kovach. He was educated in Scranton and entered the United States Marine Corps in 1954 upon graduation from High School. He was honorably discharged in 1958 at the rank of Corporal. Robert entered the United States Postal Service in 1958 and retired in 2001 after 43 years of service. He was a Gold Card member of Branch 17, N.A.L.C. and served as their president for 39 years; the longest term held by anyone in the State of Pennsylvania. Upon retirement, Robert volunteered with the American Red Cross and Meals on Wheels of Lackawanna County. He also enjoyed fishing with his grandchildren on the upper Delaware River. He was preceded in death by his first wife, Shirley and his granddaughter, Sarah Burns. He is survived by his daughter, Michelle Kovach and Family, stepchildren; Carlene Spitzer, Judy Sexton (Tim) and three grandchildren. The family would like to thank Dr. Daniel Kazmierski and the entire staff of Gino Merli Veterans Center for their unwavering kindness and compassion. Additional thanks to the Hospice of the Sacred Heart for their added support and compassion.

Per the request of Robert, there will be no calling hours. Friends and family are invited to attend a Funeral Divine Liturgy, celebrated by the Rev. Leonard A. Martin, SJ, Pastor, St. Mary’s Byzantine Catholic Church, 310 Mifflin Avenue, Scranton, on Wednesday, at 10:30 am. Interment will be held at the convenience of the family. Arrangements under the direction and care of the Edward J. Chomko Funeral Home & Cremation Services, West Scranton. Marine Corps Honors will be accorded.