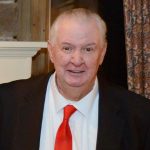 Celebration of Life and Services will be held on Wednesday, from 4 to 6:30 pm, with services at 6:30 pm, officiated by Pastor Don Strope, in the Funeral Home.

Interment will be private at the West Pittston Cemetery.

Ronald K. Crisci 83, of South Scranton, died on Saturday, at Linwood Nursing and Rehab Center, East Mountain. His beloved wife and best friend is Thelma (Jones) Crisci. The couple had celebrated their 57th wedding anniversary this past July. Born in West Pittston, he was the son of the late Leo and Theresa Crisci. Ron was the owner of the former Tony Harding’s Restaurant on Lackawanna Avenue until 1992 when it was taken for the Steamtown Mall Construction. Ron retired from Pasanich Engineering. Ron was an avid golfer, who enjoyed spending time with his grandchildren, playing poker with family and friends, and having a coffee while he was people watching. Ron is survived by his sons; David A. and his wife Allison, Mass., Thomas R. and his wife Kristin, Scranton, 11 grandchildren; Judy Ann Crisci-Burns, Nicole Nagel, Victoria Crisci, David Allen Crisci Jr, Sophia Vivian Crisci, Maddie Crisci, Allison Sobolewski, Michael Sobolewski, Molly Burns, John Burns III., Hailey Moffit; a great grandson, Luke Nagel, daughters in law Helene Crisci, Scranton, Linda Burns and her husband John, Stroudsburg; brothers, Michael and his wife Marilyn, NJ, Raymond and his wife Ann, Fl, sister Barbara Regula, CT.; nieces and nephews. Ron was preceded in death by his daughter Judy Ann, son Ronald Jr, and his brother, Richard. A Celebration of Life and Services will be held on Wednesday, from 4 to 6:30 pm, with services at 6:30 pm, officiated by Pastor Don Strope, in the Edward J. Chomko Funeral Home & Cremation Services, 262 Railroad Avenue, West Scranton. Interment will be private at the West Pittston Cemetery.