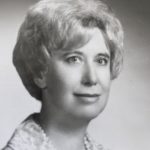 The eldest child of the late John and Cecelia Malinosky Bolser, Rose was a lifelong resident of Jessup. She was an active parishioner of St. Michael’s, now Queen of Angels Church. She graduated from St. Michael’s Grade School and St. Patrick’s High School in Olyphant, and then pursued business studies in Scranton before beginning a career with Barbizon of Jessup, Inc., where she eventually became director of payroll operations.  After Barbizon closed its doors, Rose entered the public sector, working as a medical records specialist at Scranton State General Hospital and then at Clark’s Summit State Hospital. She worked into her 70s, retiring in 2000.

Rose was totally devoted to her family, starting with her parents, with whom she lived and for whom she cared in their declining years. She was a loving sister and friend to each of her younger siblings, and a loyal caregiver when they were afflicted with serious health issues that eventually took their lives.

Rose’s devotion to family reached new levels when her sister Madlyn became widowed with six young children in 1968. She joined her sister and joyfully embraced all responsibilities to help raise a young family. She even learned how to drive in order to transport the children to their church, school, and sporting events.

Rose was so very proud of the six Walsh children. She was with them at all of their special events, whether it was First Holy Communion or Confirmation or graduation. She never forgot their birthdays, and every year each of them (and eventually their spouses, too) would receive a soprano rendition of the “Happy Birthday” song in an early morning telephone call on their special day.

The Bolser homestead and its big back yard was a wondrous place to play and explore. It was a gathering place throughout the year, but especially at the holidays, when Rose would host a huge Christmas Eve gathering and gift exchange before dashing off to midnight Mass to lead the choir. As the Walsh children matured and began having children of their own, Rose treasured this next generation.  Nothing pleased her more than to have her great-nieces and great-nephews come to her home and carry on the Bolser and Walsh traditions.  She showered love and special presents on Kellen, Daniel, Matthew, Katelyn, Brian, Patrick, Mark, Eric, Kevin, Morgan, Meghan, Erin, and Brady.

Rose drew great satisfaction from her service to the Lord, and particularly venerated the Blessed Mother. As a schoolgirl, she was named May Crowning Queen. As an adult, she made pilgrimages to the Holy Land, Rome, and Medjugorje in the former Yugoslavia.

Her strong Catholic faith led her to a life of unending volunteerism and devoted service at St. Michael’s. If there was a church event, you can guarantee that Rose was sharing her time, vivaciousness and financial resources to help the event run smoothly. She exceptionally served as a member or director of the parish choir for over 70 years and led it at liturgies and concerts not only in Jessup but also at Diocesan events. Along with processing the weekly collections for years, she served as treasurer for too many dinners, jubilees, picnics and fundraisers to count. Rose exemplified the spirit of loving all others and financially supported various Catholic missions, including the Boys’ Town national charity and the Catholic Junior League Christmas Party for the children at St. Joseph’s Center in Dunmore.

Many who heard her sing enjoyed her talent and love for music. Rose performed not only at her church but also on local radio and with the Scranton Choraleers, a select traveling chorus group. She used her talent as a way to bring people together, including those of different faiths and backgrounds. When not busy serving as the maid-of-honor, she was the vocalist at area weddings, while also participating in holiday concerts and numerous funerals. She sang and was lector at many family marriages, and was honored to sing and lector at the wedding of a friend’s son in the chapel of St. Peter’s Basilica at the Vatican.

Rose travelled extensively. In addition to the pilgrimages noted above, some of her other destinations were Spain, Portugal, Hawaii, Florida, and California, but when pressed for a favorite she would say it was Alaska.

Rose enjoyed dining out, particularly when it involved Italian cuisine. There was nothing she liked better than when a niece or her nephew, and their family, would come to town and take her out for dinner. She also cherished her social engagements with her girlfriends, particularly the monthly birthday club when the guest of honor would choose the venue.  Her friends and family reveled in her sharp wit and effervescent personality.

Rose valued her independence. Consequently, Rose’s family would like to thank the dedicated and caring individuals whose assistance made it possible for her to stay in her home for as long as she did, especially Lois Booth, Carol Cirba, and Jimmy Walsh. They also thank the remarkable staff at St. Mary’s Villa for their compassionate caregiving during her recent stay.

The family also wishes to thank the Rev. Gerard McGlone, pastor of Queen of Angels Church, for celebrating a Funeral Mass for the family on July 1, 2020; Elaine Safko, pianist, for her musical accompaniment during Mass; and Deacon Gerard Carpenter for presiding at the interment at St. Patrick’s Cemetery, Olyphant.

Arrangements were entrusted to the direction and care of the Edward J. Chomko Funeral Home & Cremation Services, West Scranton.