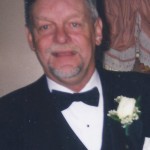 Roy Phillips Jr., 68, of West Scranton, died Friday at Geisinger/CMC VNA Hospice Unit. Born in Scranton, he was the son of the late Roy and Elizabeth Roseweir Phillips. A 1965 graduate of West Scranton High School, he was a member of Hyde Park Lodge 339, Free and Accepted Masons. He was of the Protestant Faith and a retired truck driver having worked for several local trucking firms. Roy had served with the 129th Infantry of the Illinois National Guard, and was an avid Steelers fan. He is survived by one son, Roy Phillips III and wife Cara, one daughter, Kristen Phillips and fiancée Ben Gervasi, all of Scranton, one granddaughter, Selena Phillips, two sisters, Janet Havenstrite, Esther Foley and husband Michael, all of Madison Twp., his former wife, Marlene Dusko Phillips and several nieces and nephews. Roy’s family extends a very heartfelt thank you to the ICU at Geisinger/CMC and the VNA Hospice Unit for the compassionate care given to Roy and his family. Masonic Services will be held on Tuesday at 7:30 pm, followed by Services of Christian Burial by the Rev. Arthur Davis, in the Edward J. Chomko Funeral Home & Cremation Services, 262 Railroad Avenue, West Scranton. Viewing for family and friends will be on Tuesday, 4 to 7:30 pm. Interment will be private. In lieu of flowers, memorials are preferred in Roy’s name to the Griffin Pond Animal Shelter, 967 Griffin Pond Road, Clarks Summit, PA 18411