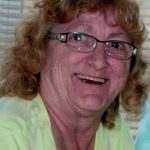 Viewing for family and friends will be on Tuesday, 5 to 7 pm

Services will be held on Wednesday in the funeral home at 10 am by the Rev. Richard Bradshaw.

Sally Ann Maconeghy, 77, of Taylor, passed on Friday afternoon at Hospice of The Sacred Heart, Dunmore.  Born in Scranton, she was the daughter of the late Ken and Sarah Fuller. Sally was educated in Scranton schools, retired from Triple A Manufacturing, Scranton after 30 plus years and was a member of Asbury United Methodist Church, Scranton. Sally is survived by her husband, William A. Maconeghy, two daughters; Marian Kesler, Florida, Jayne Cole and husband Timothy, Scranton, one son; Donald Fox and companion, Missy Seymour, Scranton, one sister; Alice Murphy, Florida, four brothers; Kenneth Lillie, Scranton, her triplet brothers; Ted, Ray, and Sam Robbins, all of Scranton, in Sally’s words, “umpteen” grandchildren, two great grandchildren, and many nieces and nephews. She was also predeceased by two sisters, Betty Lou Merritt and Debbie Dixon, and one brother Thomas Robbins. Viewing for family and friends will be on Tuesday, 5 to 7 pm and Wednesday, 9 am till time of services in the Edward J. Chomko Funeral Home & Cremation Services, 262 Railroad Avenue, West Scranton. Services will be held on Wednesday in the funeral home at 10 am by the Rev. Richard Bradshaw.  Interment will follow in Fairview Memorial Park, Elmhurst Township.