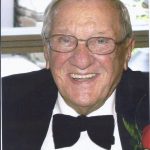 Samuel “Sam” Edward Toman, 90, of East Mountain, died Thursday night at home after a long illness. He is survived by his wife, Maureen Toman. Born in Scranton, he was the son of the late Samuel and Anastasia Toman. A graduate of West Scranton High School, he was a WW II Army Air Corps veteran serving with the 53rd Weather Recon. Upon returning from the war, Sam studied at Penn State and received his drafting degree from ITT, and founded the Toman Construction Company and was a general contractor in residence, commercial and industrial construction. Sam was a member of Scranton Elks Lodge 123, the Pine Hills T & A, Golf League, and volunteered with the American Red Cross for many years during many natural disasters, locally, nationally and internationally. Sam was the fifth registered life member of VFW Post 25, Rockwell Avenue and a life member of the American Legion. He was also an avid golfer, hunter, fisherman, deep sea fisherman and trips to Canada many times with his younger son, the late Sam E. II.