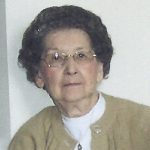 A Mass of Christian Burial will be celebrated on Tuesday at 9:30 am in SS Peter and Paul R. C. Church, West Scranton, by the Rev. Fr. Sam J. Ferretti, Pastor. Interment will follow in the parish cemetery, Taylor. Viewing for family and friends will be on Monday, 5 to 8 pm in the Edward J. Chomko Funeral Home & Cremation Services, 262 Railroad Avenue, West Scranton.