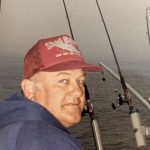 A private graveside service for family will be held in St Mary of Czestochowa Cemetery, Greenwood.

Stanley A. Maros Sr,, 82, of the Greenwood section of Scranton, passed away on Monday, May 18, at Hospice of the Sacred Heart in Dunmore after a long battle with Parkinson Disease. He was the husband of Carol (Shygelski) Maros and would have shared 60 years of marriage in October.

Born in the Greenwood section of Moosic, to the late Frank and Jean (Malinowski) Maros. He was a 1955 graduate of South Catholic and then went on to attend the University of Scranton. He served in the Army Reserves for 10 years and was employed at Affiliated Foods for over 30 years and then went on to retire from Tobyhanna Army Depot. He was a member of Divine Mercy Parish in Scranton.

He thoroughly loved spending time with his family, especially his sons and grandkids. He also enjoyed every moment spent with his beloved wife. She was his rock and their love was desirable. He enjoyed hunting, golfing, baseball, fishing, and bowling. He was an excellent softball player. He played in the Industrial League for Banner Foods. He was a great defensive third baseman. Some of the plays he made had teammates calling him Brooks, like Brooks Robinson. He also had the nickname Roger in reference to Roger Maris. He was a member of St Stephen’s and Parker House bowling leagues and St. Mary’s Greenwood and Murphy’s Pub golf leagues. He coached his eldest sons Lackawanna Little League team, Gress Stores, where he coached them to a City Championship in 1973. He also coached his youngest sons Teener League team at Connell Park, Andrew Brown’s, where they went on to win the 1981 City/County Championship. He was proud of having made a Hole in One at Skyline’s golf course on number 14 with his son as the witness. He loved family trips to French Creek and Black River in New York, where he spent the time teaching his grandkids the ins and outs of fishing. He loved to play poker with the guys, even though he was one of the worst poker players ever. He only cared about having a good time. His sense of humor was always the life of the party. He had the ability to have a witty and funny comeback for almost any conversation. He was a Red Sox fan and a Pittsburgh Steelers fan. His life on this Earth has made an impact on everyone who knew him. His time spent with family and friends gave him such joy and they will cherish it forever. A private graveside service for family will be held in St Mary of Czestochowa Cemetery, Greenwood. In lieu of flowers, donations can be made in Stanley’s name to Matthew Mursch Jr Foundation, 195 Wells St Scranton, PA 18508 or St. Jude’s Children’s Hospital. Arrangements are under the care and direction of the Edward J. Chomko Funeral Home & Cremation Services, 262 Railroad Avenue, West Scranton.