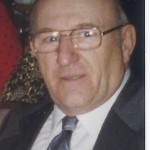 Stephen Palahunich, 88, of Scranton, died Monday morning at Geisinger/CMC VNA Hospice Unit. His wife is Bertha Sobuta Palahunich. Born in Scranton, he was the son of the late Michael and Agnes Smar Palahunich. Educated in Scranton Technical High School, he was an Army Veteran, serving as a Corporal with the 81st Constabulary Squadron as a reconnaissance car commander in the European Theatre of Operations and retired after more than 30 years from the Chamberlain Corporation.  Steve was a lifelong member of St. Mary’s Byzantine Catholic Church. He was an avid bowler and held memberships with the Scranton Sokol Bowling League, the American Ukrainian Veterans Assoc. and the Tauras Club. He is also survived by three sisters, Mary Gruszecki, Ann Cofka, both of NJ, Katherine Herko, Vermont, and Johanna Petranchak his caregiver, Scranton, nieces, nephews and cousins. He was also preceded in death by three brothers, Joseph Palahunich and Michael and Andrew Sibick. A Funeral Divine Liturgy will be celebrated on Thursday at 10 am in St. Mary’s Byzantine Catholic Church by the Rev. Leonard A. Martin, S.J., Pastor. Interment will follow in the parish cemetery, Minooka section. Viewing for family and friends will be on Wednesday, 5 to 8 pm in the Edward J Chomko Funeral Home & Cremation Services, 262 Railroad Avenue, West Scranton. In lieu of flowers, memorials can be sent to, VNA Hospice, 301 Delaware Ave., Olyphant, PA 18447.