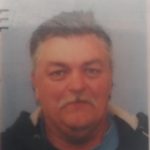 Private services will be held at a later date.

Theodore F. “Teddy” Rapaciewicz, 60, of West Scranton, died Sunday, April 5, at home. His wife, Shirley Ann Watral Rapaciewicz died on January 25, 2019. Born in Scranton, he was the son of the late Theodore and Evelyn Fezuk Rapaciewicz. Teddy was employed in the local truck delivery service up until his disability and was a former member of St. John’s Byzantine Catholic Church, in the Bellevue section of West Side. He was a Navy Veteran serving as a Petty Officer 03.

He is survived by three sons, Brian VanValen and fiancée Kate, Scranton, Chad Bidwell and wife Maura, Dunmore and Mark Bidwell, Scranton, one brother, George Rapaciewicz, Scranton and seven grandchildren. Private services will be held at a later date. Arrangements have been entrusted under the care and direction of the Edward J. Chomko Funeral Home & Cremation Services, 262 Railroad Avenue, West Scranton