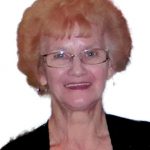 Theresa B. Stanek, 79, of West Scranton, died on Thursday at the Green Ridge Health Care Center. Her husband of 58 years is Robert A. Stanek. Born in Scranton, she was the daughter of the late Walter and Theresa Grayeski. Theresa was educated in South Catholic High School and was a member of SS Peter and Paul RC Church, West Scranton, the Sloan Seniors and retired from Haband as a supervisor after 33 years of employment. Theresa enjoyed cooking, gardening, puzzle books, wrestling and her dog, Baxter. She is also survived by her son Robert D. Stanek and wife Dana, Scranton, and daughter Joann Marsili and husband John, Archbald, grandchildren, Rachel and Christopher Marsili, Chelsea, Austin, Caitlynn and Jordan Stanek, great granddaughter, Liliana. Sisters in law, Patricia Grayeski, Georgia, Genevieve Grayeski, Florida, brothers in law, Gerald Stanek, David Stanek and wife Rose. She was also predeceased by brothers, Walter and Julius Grayeski and sister in law, Patricia Stanek. A private Mass of Christian Burial will be celebrated in SS Peter & Paul RC Church with private entombment at Cathedral Cemetery Mausoleum. A Memorial Mass will be celebrated at a later date to be announced. Arrangements have been entrusted to the care and direction of the Edward J. Chomko Funeral Home & Cremation Services, West Scranton. Condolences may be left on the Funeral Home web site.