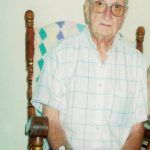 As per Tom’s request, there will be no services.

Thomas J. Mangan, 80. Of Scranton, passed away on Sunday. His wife of 57 years is JoAnn Sevensky Mangan. Born in Scranton, he was the son of the late Thomas Sr. and Eileen Wallace Mangan. Tom was a United States Army veteran, having served with the 75th Artillery with the 2nd Howitzer Battalion and retired after 41 years with the Pennsylvania Gas and Water Company. Tom is also survived by one daughter, Gail Brown and husband Daniel, Clarks Summit, one son, Thomas Mangan III, Pittston, 2 granddaughters, JoAnn K. Mangan, Swoyersville and Brady Brown, Clarks Summit, one brother in-law, Brother Robert Sevensky, OHC.As per Tom’s request, there will be no services. Arrangements are entrusted to the direction and care of the Edward J. Chomko Funeral Home & Cremation Services, West Scranton.