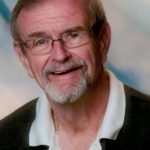 A private funeral will be held, with a Mass of Christian Burial at SS Peter and Paul Church R.C. Church, West Locust Street, Scranton. Interment will follow in the parish cemetery. There are no calling hours.

Thomas P. Cogliser, 76, of West Scranton, died on Saturday morning at Allied Hospice Center. His wife is Diane M. Kowalski Cogliser and the couple would have celebrated their 54th wedding anniversary in August. Born in Scranton, he was the son of the late Donald and Ann Cogliser. Tom was a 1962 graduate of Scranton Central High School and joined the Navy shortly after graduating. He served aboard the USS Wasp as a Machinist Mate 3c. He was a member of SS Peter and Paul R. C. Church, West Scranton and had been employed as a printer for the former Scranton Tribune until its untimely closing. He was also employed by Judge Lumber as counter sales and then by All Saints Academy, West Scranton as maintenance supervisor up until his illness. Tom most cherished time spent with his family, golfing, working in his yard and gardening. He is also survived by a daughter, Christine Herne and husband Keith, three grandchildren, Bryan Cogliser, Matthew and Victoria Herne, all of Scranton and one sister, Doris Sanner, Clarks Summit, as well as many family members and friends. He was predeceased by a son, Thomas M. Cogliser and a brother in-law, John C. Sanner, MD. A private funeral will be held, with a Mass of Christian Burial at SS Peter and Paul Church R.C. Church, West Locust Street, Scranton. Interment will follow in the parish cemetery. There are no calling hours. Tom’s family extends a thank you to All Saints Academy and the VA Medical Center, Wilkes-Barre, for the assistance and compassion given to Tom. Arrangements have been entrusted to the direction and care of the Edward J. Chomko Funeral Home & Cremation Services, 262 Railroad Avenue, West Scranton