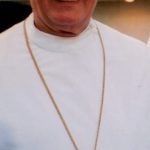 A Memorial Liturgy will be celebrated at a time to be announced.

CHRIST IS RISEN!  INDEED HE IS RISEN!  It is with deep sorrow, yet with joy of the Holy Season of Pascha, that our “Dear Old Dad”, Very Reverend Protopresbyter Nestor S. Kowal fell asleep in the Lord on Great Friday, April 17, 2020.  He leaves behind his Mother and our Baba, Eugenia Kowal, his children, Vera, Nestor and Taras , daughters-in-law Heidi and Lisa, and his grandchildren, Elias Zachary, Priscilla Joan, Larissa and Alexander, who loved their Didi dearly.  In addition, he will be deeply missed by his brother and our Uncle, Bohdan Kowal and wife, Janet and his baby sister and our Tsyotsia, Helen Buckley and husband, Robert, his sister-in-law and our Tsyotsia, Natalia Tymczyszak along with our cousins, his niece and Goddaughter, Erin Ruggiero and her husband Biagio and their children Benny and Eliza and nephew John Buckley.  Also, he leaves behind his special girls, Melissa, Stephanie (Goddaughter) and Kristin Semenko, daughters of his dear Kymi, Rev. Michael J. Semenko, of Blessed Memory and his wife Sharon Semenko.

He is now in eternity with our dear Mom, Tamara, his Father and our Dido, Zachary, our Baba and Dido, Ilia and Vera Tymchyshak, our Uncle Myron Tymchyshak, his dear Aunt, Anna Lisewych, his cousin, Bohdan Lisewych and his son-in-law Harry Krewsun.  Lastly, our Dad is with his Uncle and Aunt, Very Rev. Mitred Andrew and Anastazia Dworokiwsky, of Blessed Memory, who were most special to him as they guided him into his Calling into the Holy Priesthood.

Our Dad was born Stephan Nestor on October 28, 1937 in Zolochiwka, Ukraine.  His family and he experienced difficult times during WWII and eventually arrived in Germany where they spent time in Obernzenn and Erlangen in displaced persons camps until they came to the United States on February 22, 1949 and settled in Ambridge, PA.  While in Germany our Dad and Uncle Boyd were members of PLAST.  The Kowal Family soon became an integral part of Saint Volodymyr Ukrainian Orthodox Church in Ambridge and the Ukrainian community in Pittsburgh.  They soon welcomed their baby sister, Helen.  After the kindness of the Evanitsky Family in taking them into their home when they first arrived in the US, the Kowal Family’s first home was on Valley Road in Ambridge, where so many dear memories of the early days took place and Dad spoke of them until his last days.

Dad’s seminary days were a big part of his life.  He shared stories of traveling across Canada with Metropolitan ILARION, of Blessed Memory and Archbishop IOV, of Blessed Memory, and meeting many people and learning “how to be a priest”.  His dearest seminary friends were Metropolitan CONSTANTINE, of Blessed Memory, who remained a constant confidant throughout their lives and Very Rev. Mirone Klysh who shared many experiences on their journey to the Holy Priesthood.  Upon graduating Saint Andrew’s Seminary in Winnipeg, he settled in Chicago where he met his “Pani” and they married on October 27, 1962, always joking that he was “married before he was born”.  He was ordained into the Holy Priesthood by His All Holiness Patriarch MSTYLAV, of Blessed Memory, on November 21, 1965.  He was assigned as pastor to Saint Michael Ukrainian Orthodox Church in Scranton in March of 1966 where he would remain as pastor for the next 50 years.  He made a life for our family with his new Parish family immersing all of five of us into the Scranton community.  It was important to our parents that our family continue to be involved with anything Ukrainian thereby keeping our faith, heritage and traditions paramount in our lives.  Our life was fun and simple – always concentrating on family values and treating people with respect – never forgetting our Dad’s words “always put yourself in other people’s shoes before you speak”.  That is why their love and support along with our lives with them are such a big part of who we are and why we remain eternally grateful to our Mom and Dad for giving us life.  One of the most joyous moments for our Dad was to baptize his twin grandchildren, Larissa and Alexander, in Chicago in the summer of 2014.

Father Nestor and Pani Tamara were a team.  Where one went the other followed and their tireless work together for God, Church, Ukraine, Community and Family (in that order) was their life’s mission.  Dad was the front man and behind him was our beautiful and talented Mom executing what was needed; yes, there were times she was the leader, especially in the kitchen! Again, a perfect duo graced by God to serve the multitude.

What can you say about a man who served God in every way possible?  Everyone who knew him can share a special Father Nestor story.  If you were his friend you were a friend for life.  Whether it was vesting a bishop in Canada or in Bound Brook, performing baptisms, weddings and funerals, dancing the night away at a Malanka, counseling troubled youth in our community in his work with the county Juvenile Office, directing traffic at the Solemn Novena to Saint Ann, making pyrohy for Saint Michaels, building picnic tables for countless friends, working security at Sugarmans, being with his people in Glen Spey, serving the spiritual needs at ODWU in Lehighton, participating in many Ecumenical Services on the east coast, spending countless hours as an auditor and dedicated volunteer with the Ukrainian Fraternal Association in Scranton and at Verkhovyna, he left a bit of himself with everyone he met, making them instant friends.  We, along with our many childhood friends and neighbors, called him the People’s Priest and we, along with our dear Mom, gladly shared him as he continued his vocation of serving God and His people.  Though everyone knew that when he was perturbed, he let you know, it was also understood that it was fleeting and that he never held a grudge and truly never intended to offend anyone.  He was a man of faith and God gave him that rare quality to be comfortable with himself which made everyone surrounding him at ease.  He was the Scranton Police Chaplain and Scranton Fire Chaplain for many years – his brothers truly loved him.  Bowling was another favorite pastime and he was a member of Ukrainian leagues in Canada and in Scranton, the P.A.R.K. Radio Club league and of course with his “Tripp Park” buddies – he was always the life of the lanes and we, his children, grew to enjoy going to the lanes with him.  He loved being on “The Avenue”, especially with Eli and Priscilla, and of course being with his dear friends Marie and Gus at Jay’s every day.  They and their patrons were a loving family to our parents and we cherish and always remember our Jay’s family with great fondness.  Our Dad just loved being in the woods, smoking cigarettes, eating apples, walking barefoot in the grass and napping outdoors – those were obvious loves from his early years abroad.

Our Dad’s school days at Ambridge High School were fun for him where he was a member of the Glee Club and Basketball Team.  Being an excellent dancer and singer offered him the opportunity to perform with the Duquesne Tamburitzans.  He often spoke of his expertise in fitting people for shoes and he was an outstanding mason having built two buildings on the property of Saint Michaels for use at the annual picnics, where, once again, he was “star of the event” bringing so many friends to support our Church functions.  You can say our Dad knew a little about everything having worked at a funeral home and ambulance service when he was a young man.  Later in Scranton, he worked for his dear friend Bobby driving ambulance and helped to bring many children into the world.  Our Dad served as a Ukrainian interpreter for the US Immigration Service in Chicago.  His command of his native language was superb where he could easily switch languages even in song.  Since coming to Scranton, The Farmer’s Market was our family’s favorite place to be and even Eli and Priscilla have fond memories of being with their Didi eating french fries.

Numerous parishes within the Ukrainian Orthodox Church of the USA were served by Father Nestor.  To name a few: Saints Peter and Paul, Glen Spey was very special to my parents.  To them Glen Spey was Ukraine and nothing would have made them happier than to retire to Verkhovyna.  He served the parishes of Saint Volodymyr, Saint Sophia and Saints Peter and Paul in the Chicago area along with Saint John Parish in Johnson City upon the falling asleep of his dear friend Very Rev. Mitred Frank Lawryk, of Blessed Memory.  He also served Saint Luke Parish in Warners and Saint Andrew Parish in Blakely.  In addition, the Ukrainian Greek Catholic Parishes of Saint Vladimir in Scranton and Saint Volodymyr in Glen Spey held a very special place in his and our Mom’s hearts.

In closing, we are most grateful to our dear Metropolitan ANTONY and His Eminence Archbishop DANIEL for their love of our Dad and our Mom.  We will never forget their kindness and the constant prayers with which they showered them.  To his brother priests, we thank them for loving and respecting him.  To the many members of our diocese, where our Dad served as Vice President of the Consistory for a number of years, we thank them for always being his friend.  Finally, to his countless friends within our Holy Church, the Ukrainian Diaspora and, of course, in our Scranton Community, we are forever grateful for the love and support of our Dad.  We thank the medical professionals and caregivers for our Dad for their care in his times of need. A special thank you to Ed and Andy Chomko and their families for their love and support. We, his children, are the fortunate ones to call him Dad, but the world was also fortunate to call him Father.

A Memorial Liturgy will be celebrated at a time to be announced.