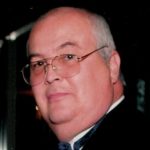 Walter M. “Mike” Tucker Jr., 71 of Scranton, passed on Monday, December 6, 2021 after a lengthy illness. His wife is Sharmayne Schwenk Tucker and the couple celebrated their 50th wedding anniversary November 13. Born in Scranton, he is the son of Mary Lenko Tucker, Old Forge and the late Walter M. Tucker Sr. Mike was a 1968 graduate of Scranton Central High School and received a B.S. Degree from Wilkes University. Mike was a United States Navy veteran having served on the USS Wasp and had been employed as a purchasing agent for RCA for 29 years and retired from Flowserve, and was a member of St. Vladimir Ukrainian Catholic Church, Scranton.