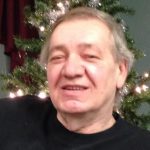 There will be no public services.

William E. “Billy” Herman, 70, of North Scranton, passed on Wednesday, December 22, at Geisinger/CMC after being stricken ill at home. Born in Scranton, he is the son of the late John and Helen Ostromecki Herman. Educated in Scranton schools, he retired from Crystal Soda.

Billy was predeceased by his parents, brothers; John “Jack” Herman and David Herman.

There will be no public services.