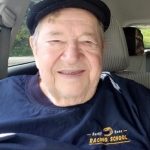 Services will be held at a later date.

William K. Smith, 85 of Jefferson Township, went home to be with the Lord on Friday August 14, 2020. His late wife, of 57 years, Rose Bombar Smith, died October 2016. Born in Nicholson, he was the son of the late William and Mae Gibbs Smith. William was a graduate of the Johnson School’s first graduating class of which he was very proud.   He was also a black belt in Jujitsu.  He loved to hunt and fish with his sons.   Bill was a member and attended Elmdale Bible Church. He taught Sunday School for over 50 years.  He loved the Lord.  He is survived by a daughter, Lisa and husband Peter Baglio, Madison Twp., three sons, William Smith, Jefferson Twp., James Smith and wife Betsy, Covington Twp., and David Smith, York. Seven grandchildren, 16 great grandchildren, sister, Sharon Zaorski, Clifton Twp. He was predeceased by son, Mark Smith, grandson, JD Smith, brother, Ronald Smith and sister, Marilyn Smith. Services will be held at a later date.